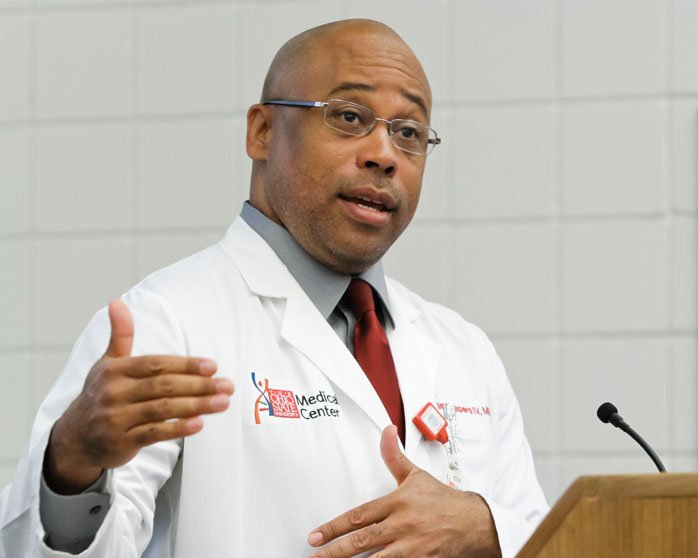 The human services sector has allies and partners across so many sectors in our community. Starting today, HSC will begin highlighting some of these individuals and organizations whose work intertwines with, inspires, or supports the work of our sector.

We’re proud to launch this effort with Dr. Quinn Capers, Associate Dean for Admissions and a cardiologist at The Ohio State University College of Medicine. Dr. Capers has distinguished himself in numerous ways, including and especially for his efforts to overcome racial disparities in healthcare, which now includes his moderation of implicit bias workshops twice a month. His efforts take on many forms inside and outside academia, including via his large Twitter following; he has also delivered a Ted talk!

HSC: Can you tell us a little bit about yourself?

Dr. Capers: I was born in Cleveland, Ohio at a hospital founded by Black doctors who were fed up with a racist health care system that would not allow them to care for their own hospitalized patients. Forest City Hospital is now closed, but for a time it was the only hospital in the city that allowed doctors of all races to have hospital privileges. Later, I was a toddler when the race riot occurred in Cleveland’s Hough neighborhood in 1966. My mother, my sister, and I were in an apartment around the corner from the center of the riot. I’ve always suspected that these two early events, being born in a hospital whose very existence was a revolutionary act and toddling around in an apartment around the corner from a major race riot somehow impacted my DNA, leaving me very sensitive to racial injustices. Since childhood, I’ve always know that all groups should be treated fairly and given the same chance for achieving success and happiness. Before my second birthday we moved to Dayton, Ohio which is where I grew up.

I don’t remember ever wanting to be anything other than a physician. I grew up enthralled by science and biology and by the end of my junior year in high school I had taken all of the science that my school had to offer. I attended Howard University in Washington, DC because I wanted to study at an historically black college, and also because Howard’s premed program was very strong. For medical school I returned to my home state to attend The Ohio State University College of Medicine. Residency and fellowship training in internal medicine, cardiovascular diseases, and interventional cardiology were all at Emory University in Atlanta.

I have been married for 30 years and my wife and I have three wonderful children. In my free time, I like to cycle, listen to music, and read.

HSC: Can you speak to the research on how implicit biases can impact patient care?

Dr. Capers: Implicit bias is a negative or positive attitude towards a person or group that occurs outside of our awareness, intention, or control. Although these biases occur outside of our awareness, they can influence behavior, possibly resulting in well-meaning people treating others differently based on race, gender, age, etc. I came across the concept as a cardiologist interested in racial healthcare disparities. Disparities have many causes, like social determinants of health, housing discrimination, unequal access to the best care, outright racism (explicit bias) of practitioners, structural bias in the healthcare system, etc. I became intrigued with the notion of implicit or unconscious bias and its potential role in unequal treatment.

Several studies have shown that a physician’s unconscious association of negative thoughts or words with a particular race or gender can be associated with therapeutic decisions that are harmful to persons in that group. For instance, one widely quoted paper had physicians take the computer-based implicit association test (IAT) that is designed to uncover implicit associations or biases (free, available at implicit.harvard.edu) and then review case
vignettes of a black or white male suffering from a heart attack. Doctors were asked if they thought the symptoms of chest discomfort were indicative of a heart problem and if they would treat the patient with a life-saving drug to terminate the heart attack. Physicians whose IAT showed “implicit white race preference” or an unconscious association of a white person’s face with good words (love, joy, warmth) and a black person’s face with bad words (danger, misery, trouble) were less likely to treat the black patient with the drug despite the black and white patients having identical presentations. It is important to note that this is not racism, which is a conscious, explicit bias. But implicit bias can potentially have life-and-death consequences in healthcare. While not all studies of implicit bias show an association with a doctor’s decision-making, enough do to cause alarm.

I recently completed a training program leading to certification to moderate implicit bias workshops, and I do so twice a month. This goes beyond admissions and is open to the entire medical center. So far we have trained over 1,000 physicians, nurses, staff and students in bias mitigation strategies. It is a real passion and we are trying to make a difference.

HSC: How have your training sessions been received by colleagues?

Dr. Capers: We end each workshop with having participants take an anonymous “pledge” to use one of the research-proven strategies to reduce implicit bias in an upcoming one-on-one interaction they will have. We send these pledges out to them as a reminder. I have been moved by the sentiments expressed in these writings. If people follow through on their written pledges, there will be a positive impact on how we treat our colleagues, patients, co-workers, and candidates who count on us to make fair judgements.

HSC: What is #BlackMenInMedicine about? Why is this movement important for you and for our community?

Dr. Capers: There are many black male physicians on Twitter. One day in 2017 some of us were having an online discussion about the landmark 2015 Association of American Medical Colleges publication entitled Altering the Course: Black Males in Medicine, which details the current severe shortage of Black males entering the medical profession. According to this publication, there were fewer Black males applying to medical school in 2014 than in the late 1970s and the downward trend continues. This portends a severe lack of Black male physicians in the future.

We discussed strategies to combat this trend and collectively came up with the idea of an online campaign to flood social media with images of Black male physicians at work, at play, and simply living their lives. The primary goal is to be role models for and inspire young men (and anyone) to pursue medicine. Other goals include changing the narrative about Black males – i.e. that not all are ‘dangerous’, but that many are physicians saving lives and serving humanity. We also wanted to speak out about injustice in any form against any group. The name of the campaign is thus ‘#BlackMenInMedicine’. As I am fond of saying, to use this hashtag on Twitter, you simply have to believe in those goals. You don’t have to be Black, you don’t have to be a man, and you don’t have to be “in medicine” to tweet messages or photos that support Black men in medicine. We welcome all voices in this important effort to reverse the shortage of Black men applying to medical school.

HSC: In your opinion, what is the key to having productive conversations about race and cultural competency in both clinical care and in the human services?

Dr. Capers: We must start these conversations with respect for individuals, individual cultures, and an understanding of the power of diversity. Diversity helps us do everything we do in medicine better. Diverse research teams approach problems in innovative ways; diverse clinical teams provide high quality care; and physicians who attend diverse medical schools are more comfortable treating patients of all backgrounds. If we approach the topic of diversity and inclusion from the broadest framework (race, gender, religion, national/immigrant status, sexual identity) from a foundation of respect for the individual and a deep belief that all people should have an equal chance at happiness and success, we will have productive conversations that lead to the best results.